Lindum is a really nice company to work for. It has a nice bunch of people and good teams, but they also help you to progress through the company and learn new things. In the BMS division, there are lots of different things going on that you can get involved in, so you can keep learning new skills and trades. I don’t think I’d get that if I took a different joinery job.
Katie Hughes | Joinery Apprentice
Lindum Group

Each one has passed their NVQ Level Two course following three years of studying at Lincoln College and on-the-job training on Lindum sites. 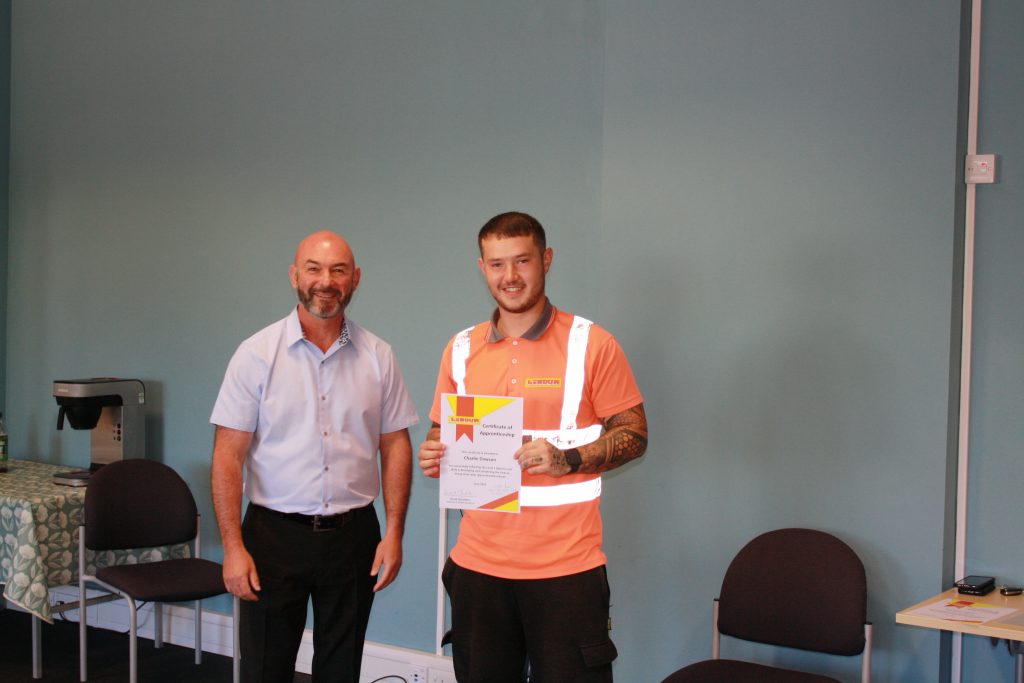 These jobs are the top five most difficult positions for recruitment in the construction industry according a 2021 survey by the Construction Industry Training Board.

To celebrate their achievements, Lindum directors held a presentation morning, where graduates were presented with certificates and treated to a bacon sandwich.

John Levey, Group Apprentice Manager said: “I am very proud of all the guys and girls that we have graduating today. They have worked so hard over the past three years and it’s great to see them getting the reward for all that hard work.

“This batch of apprentices have been particularly impressive. Their work ethic and commitment to their education has been exceptional, so it’s no wonder they’ve all been kept on by their divisions. They really have been some of the best apprentices we’ve ever had.” 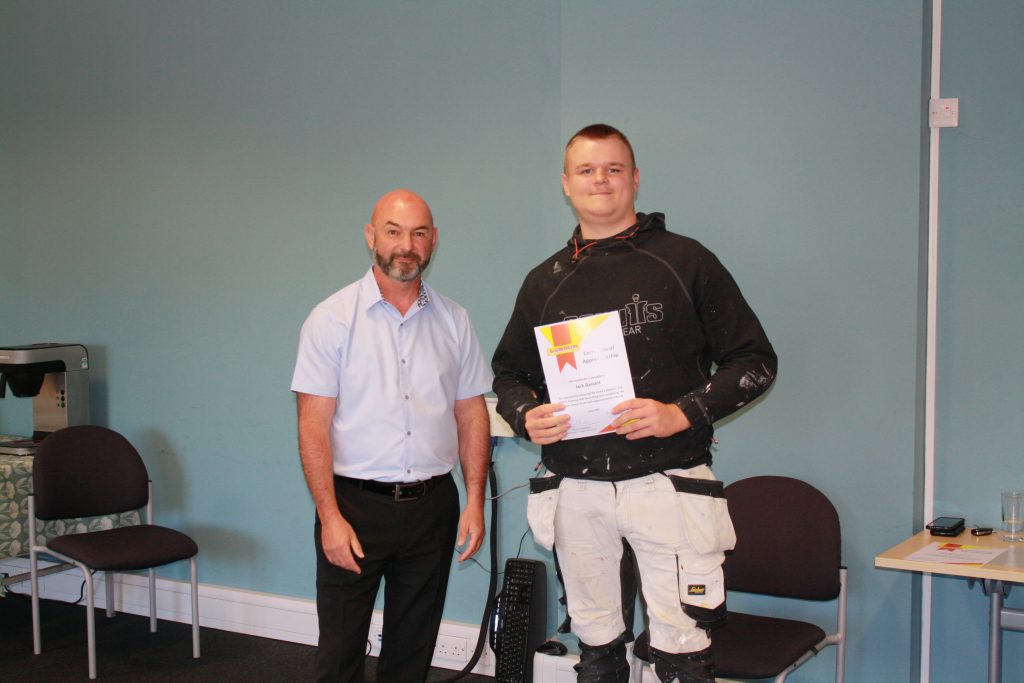 Katie has particularly shone during her time at Lindum. Earlier this year she won the Greater Lincolnshire Construction and Property Awards Apprentice of the Year title. She has now won a Student Spotlight Award for Exceptional Learning, which was presented to her on her graduation morning.

Spotlight awards are presented by Lincoln College at the end of the academic year to highlight extraordinary performances and reward continued commitment. The winners are presented with a certificate and £50 for winning. 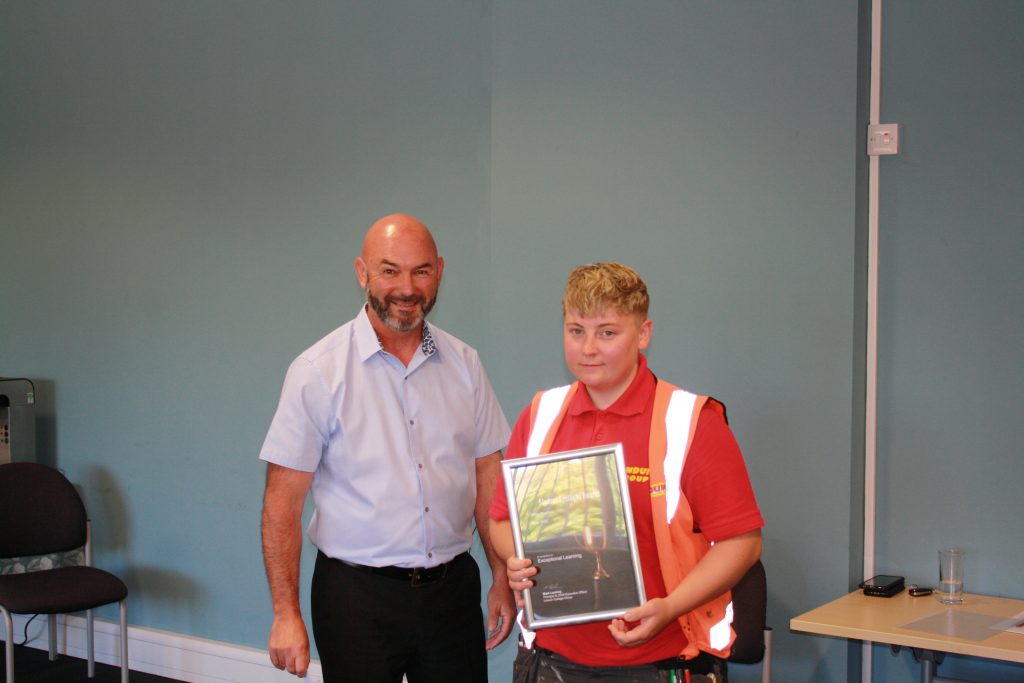 Katie said working with Lindum is helping her develop a range of skills. She said: “Lindum is a really nice company to work for. It has a nice bunch of people and good teams, but they also help you to progress through the company and learn new things. In the BMS division, there are lots of different things going on that you can get involved in, so you can keep learning new skills and trades. I don’t think I’d get that if I took a different joinery job.

“Since completing my apprenticeship they have put me on a site supervision course, which shows they want me to progress.

“My best moment at Lindum was probably getting the Apprentice of the Year award. My favourite job was a shuttering job I did a few years ago. I enjoyed it, despite the wet and the cold, because it was something I hadn’t done before and I could see the whole project from start to finish.” 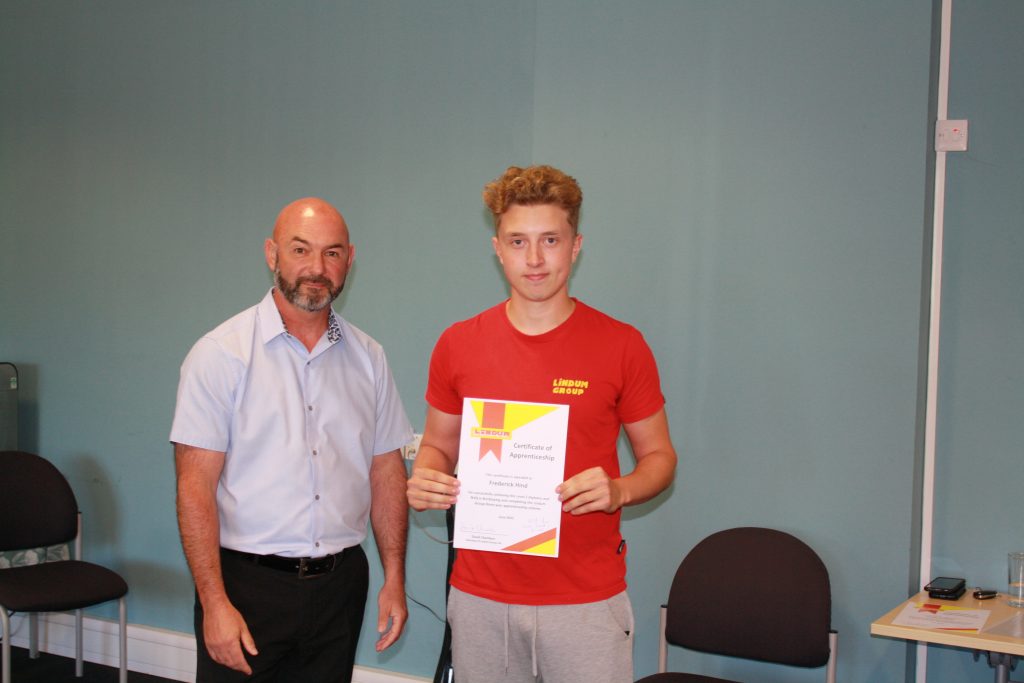 Alister has also recently won an award, which he received during the celebration breakfast. For his commitment to his course and passion for the industry, Alister won the Spotlight Achievement in Overcoming Adversity Award.

Alister said that he chose to carry on working for Lindum because it is a good balance between a strong steady job, whilst also being enjoyable. When talking about why he wanted to stay on with Lindum, Alister said: “Lindum is a really good company to work for. It is a good steady job and there’s always work to go around.

“All of the teams work well together, and it can be a good laugh. You often get good teams on site and that always helps and makes the job so much better.”

Alister said he wants to continue to develop with Lindum. He said: “For now I am just looking to really hone my skills and to continue learning. Hopefully I will make my way up the ladder, possibly to a site manager position.” 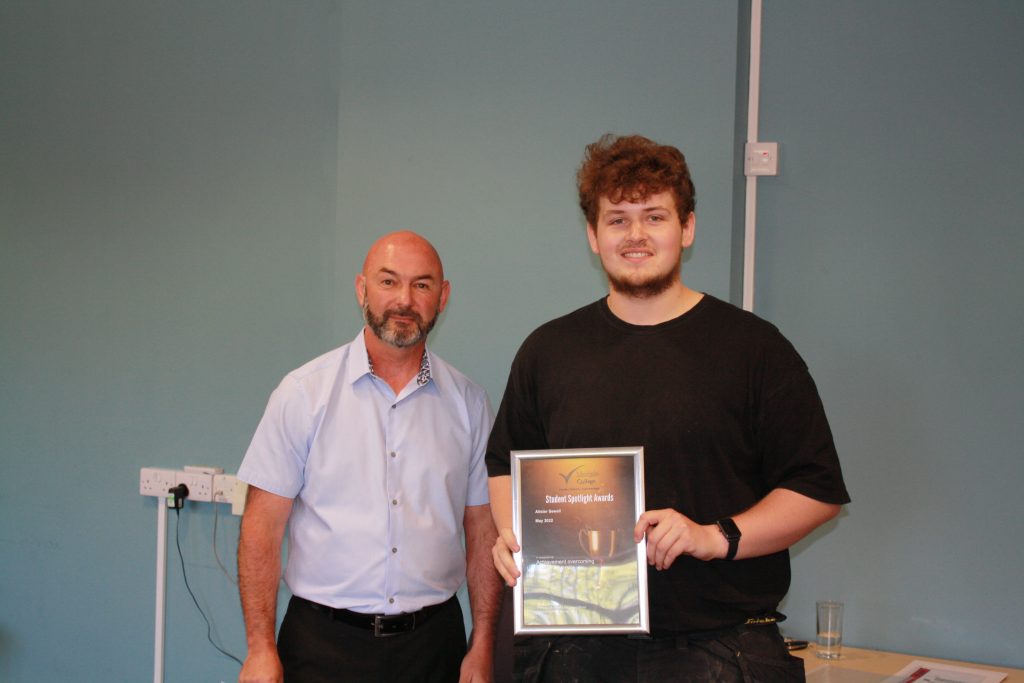 Lincoln College Group Director of Communications James Newall said: “We are delighted that our apprentices have graduated into full-time employment – it’s a great demonstration of our mission in practice.

“This really shows the benefit of apprenticeship training in creating highly skilled and productive people to contribute to local firms and the local economy.

“The success of apprenticeship training depends on dedicated apprentices, great employers and effective training providers – it’s amazing when we all get it right.”

In just over two years, Lindum has had six apprentices complete their apprenticeships and been retained by their divisions. That means a 100 percent retention rate by Lindum Group, compared to 65 percent nationally.

Lindum firmly believes in growing its own talent and invests time, money and training into apprentices so they can be the best in their chosen trade.

The CITB predicts that nationally the construction industry will need 217,000 new workers by 2025 to fill the gap and meet demand.

With many people retiring or leaving the industry it is important to have a steady flow of apprentices coming through, to meet the needs of the future.

Creating employment opportunities and upskilling local people is at the heart of new construction frameworks, which have selected Lindum as a delivery partner. YORhub has appointed Lindum to two of its frameworks, which provide construction services to the public sector across Yorkshire, Humber and Lincolnshire, as well as parts of Nottinghamshire and Derbyshire. YORbuild3 Medium […]

Nursery school pupils are making the most of a tranquil new learning environment thanks to a donation from a Lincoln charity. Children at St Giles Nursery are enjoying their new Kindness Cabin, which has been installed in the school’s garden in Addison Drive, Lincoln. The cabin was funded through a donation from local charity BNA […]

Lindum’s unique affordable housing development in the Peak District National Park has been named Midlands Small Residential Development of the Year at the Insider Media Awards. Colonel Wright Close in Bakewell, which is owned and managed by Platform Housing Group, picked up the accolade against other small developments from around the region. It is the […]

Volunteers from Lindum helped students at St Francis Special School in Lincoln try their hand at a number of potential careers at the school’s 2022 Industry Day on Tuesday 21 June. Local businesses visited the school to demonstrate the kind of activities students might like to be involved with once they have moved on from […]

New building regulations on the table at breakfast seminar

Forty house building experts from across the region gathered at Lindum Business Park today to hear about strict new regulations aimed at making homes more carbon efficient. Construction company Lindum hosted the event for its partners and clients, following a major change in national building policy this week. The breakfast seminar was a chance to […]

Twenty new homes have been created across Greater Lincolnshire for people who’ve spent time sleeping rough. Framework Housing Association purchased and refurbished properties in three towns to provide additional accommodation for vulnerable people. The charity runs hostels in Scunthorpe, Boston and Skegness, each comprising 20 self-contained flats, which are offered to those who are homeless. […]