Three national retailers are preparing to open outlets on a new business park south of Lincoln.

Howdens, Screwfix and Brewers will be opening trade counters at Discovery Park off Whisby Road in August and September, completing six years of development at the site.

The final four units were finished this summer and the new occupants are now in the process of completing their internal fit outs.

Screwfix, which sells trade tools, accessories, and hardware products, is due to open on August 23rd.

Howdens, which is a supplier of kitchens and joinery products for the building trade, and high-end decorator’s merchant Brewers will be opening in September.

Paul Dennington, Brewers’ Head of Property & Store Development, said: “We are delighted to be opening in Lincoln. The brand-new Brewers Decorator Centre will be the ultimate destination for the finest brands in paint, wallpaper, fabrics, woodcare and sundries.”

Meanwhile a spokesperson for Howdens added: “We have been looking for the right premises in this part of Lincoln for some time and this new depot will enable us to grow our local business. We are very pleased to be opening at Discovery Park as part of our on-going expansion programme.” 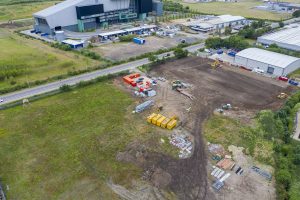 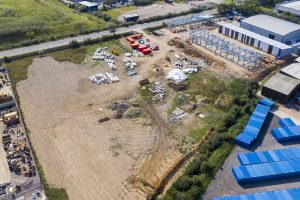 The seven-acre Discovery Park site has created 60,000 sq ft of employment space and generated opportunities for around 100 jobs. The development was brought forward by local company Lindum Group, which owns the land, in conjunction with property agents Banks Long and Co.

“These new outlets will complement and serve the southwest of the city. Brewers were keen to sit alongside them and there is space for one final tenant to benefit from such a prime trading opportunity.” 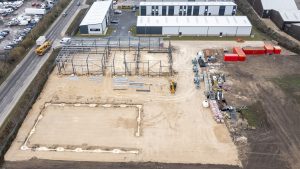 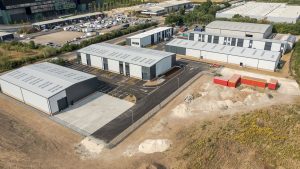 Lindum Development Manager  Mitul Shah said it was great to see the development coming to completion. “I’m delighted that all but one of the units are taken and it’s good that established national retailers have confidence in the value of this site.

“Not long ago, Discovery Park was a disused brownfield site and now it’s a bustling hub of business activity, creativity and job creation, which is a fantastic sign for the wider economy, too.”

The final unit of 3,500 sq ft is available to lease following completion of the works. Contact Banks Long and Co or Lindum directly on 01522 852442

Work to build a new warehouse and offices for an international embroidery company has begun in Ripon, North Yorkshire. The Madeira Group, a third generation, family-owned business, is expanding its UK base at the Barker Business Park, Melmerby. It is investing in a new build premises for its 26 UK-based employees, who store and distribute […]

Work continues on the refurbishment of Lincoln Central Market

Lindum Group is making progress on the refurbishment of the old Lincoln Central Market building. Working on behalf of City of Lincoln Council, Lindum is transforming the old grade II listed central market building into a hub for retail and leisure in the heart of Lincoln. The council has received £5.9 million in funding from […]

Building work is underway on a major new distribution facility in York for national parcel carrier, DPD, which will create 125 new jobs and contribute towards better city centre air quality. Award-winning development company, Northminster Properties, has appointed Lindum, York, which is on site as main contractor for the 59,250 sq ft purpose-built distribution facility […]

Plans for new business park given the go-ahead

Long-awaited work to build a new business park in Pickering, North Yorkshire is expected to begin this summer. Planning permission has been granted for 184,000sqft of new industrial space called Pickering Park. The development will form phase three of the Thornton Road Business Park and will be accessed off Enterprise Way. York-based construction company Lindum […]

Work to rebuild a fire-ravaged Burger King restaurant on York’s Clifton Moor Retail Park will begin next week (March 7th). Construction company Lindum, based in nearby Elvington, is starting restoration work so the business can reopen to customers. It comes eight months after emergency services were called to the site following reports of smoke coming […]

A purpose-built factory which will produce high-end sportswear for top-flight athletes is taking shape in South Yorkshire. Cladding on the 100,000sq ft building is almost complete at the Advanced Manufacturing Park (AMP) in Rotherham. Once finished, it will become home to SBD Apparel, which manufactures premium performance clothing worn by elite strength and fitness athletes […]

An award-winning packaging firm which works with some of the UK’s best-known food producers and supermarkets is set for a multi-million-pound expansion of its headquarters by Lindum. The family-run Wilkins Group, based on Colwick Industrial Estate, in Nottinghamshire, will create extra jobs with this extension, which aims to increase capacity in production of food packaging. […]

Teenagers who attend a support group for disabled young people have been given an insight into life on a building site. Members of the Choose2 Youth toured Lindum York’s construction project on the Clifton Moor industrial estate. They were shown some of the different job opportunities available in the industry and were talked through a […]

Plans for a new urban extension for Lincoln will be deliberated by City of Lincoln Council next month. The Western Growth Corridor which extends to 240 hectares, and is located to the north of Skellingthorpe Road, have been jointly submitted by landowners Lindum Western Growth Community Ltd and the city council. Proposals, which will be […]