It has been great to work with Lindum on this project and to see the company take its corporate responsibility seriously in light of current climate change issues.
Derrick Denton | Managing Director
UK Alternative Energy

Lindum has invested in 429 new solar panels at its North Hykeham Business Park.

The investment will reduce the amount of energy pulled from the National Grid and is expected to reduce the company’s annual electricity bill by around £16,000.

It will also offset more than 66 tonnes of carbon dioxide a year (around the same amount that 3,176 fully grown trees could absorb.)

During peak sunshine, the new panels can produce up to 156kw of energy per hour. This is the same amount needed to power 15,600 ten watt LED lightbulbs for an hour or drive 600 miles in an electric car.

The system is around 40 times the size of those usually installed on domestic houses. 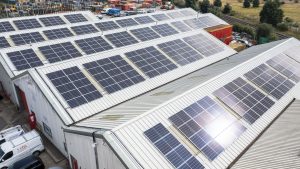 Lindum has long been a pioneer of green energy consumption. The electricity it buys from E-on is ‘sustainable’, meaning it has no carbon footprint.

By generating its own energy and pulling less from the grid, it means there will be more of E-on’s ‘green’ electricity available for other customers to use.

Our new panels were installed by North Hykeham company UK Alternative Energy, which is based down the road from Lindum on the Westminster Industrial Estate.

Managing Director Derrick Denton said: “It has been great to work with John Chaplin at Lindum on this project and to see Lindum take its corporate responsibility seriously in light of current climate change issues on this site and others they own. “This has been a big investment and I hope this inspires other Lincolnshire companies to make the change.”

Lindum has committed to being a net zero carbon company by 2031. It is partnering with The Planet Mark, to certify and measure its carbon footprint to Government standards and support its journey to substantial reductions.

The current investment has come about partly thanks to the Government’s Covid recovery response, as businesses are being offered tax incentives to press ahead with capital spending projects.

The investment is expected to be recouped via bill savings within next six to seven years and there are already talks to expand the scheme early next year.

Building work is underway on a major new distribution facility in York for national parcel carrier, DPD, which will create 125 new jobs and contribute towards better city centre air quality. Award-winning development company, Northminster Properties, has appointed Lindum, York, which is on site as main contractor for the 59,250 sq ft purpose-built distribution facility […]

Plans for new business park given the go-ahead

Long-awaited work to build a new business park in Pickering, North Yorkshire is expected to begin this summer. Planning permission has been granted for 184,000sqft of new industrial space called Pickering Park. The development will form phase three of the Thornton Road Business Park and will be accessed off Enterprise Way. York-based construction company Lindum […]

Lindum donated apple trees to eight schools as part of a campaign highlighting the need for urgent action on climate change. The fruit trees were planted by Lindum employees as part of the Great Big Green Week earlier this month. The week saw communities across the UK come together to consider our impact on the […]

Lindum is in the final stages of constructing a new hotel complex in Newark, with completion only several weeks away. The three floor, 66-bedroom Travelodge is due to open in March at the site of the former Robin Hood Hotel, generating up to 70 new jobs and accompanied by three ground floor retail units to […]

Plans which will see Lincoln benefit from a Sustainable Urban Extension (SUE) of 3,200 new homes with improved infrastructure and the creation of thousands of new jobs have moved a step closer to becoming reality. Revised and additional documents relating to the Western Growth Corridor have been submitted to the city’s planning authority. Lindum Western […]

Business Park tenant looking to clean up across Lincolnshire

A growing business which expanded into larger premises on the Lindum Business Park just as England was plunged into lockdown is hoping to be awash with new custom now restrictions are easing. Lincoln Laundry offers commercial washing, drying and ironing, as well as linen hire, collection and delivery. After eight years growing its customer base […]

Lindum has invested £275,000 in a bespoke waste sorting device which will reduce the amount of rubbish it sends to landfill. The company’s Saxilby-based recycling centre has purchased an air density separator, nicknamed a Zig Zag machine, which helps to separate valuable pieces of stone from other waste particles. The purchase is expected to reduce the […]