Work to improve public space in Lincoln Cornhill is now complete following the official re-opening of the area.

City of Lincoln Council staff, along with the Mayor of Lincoln, Cllr Jackie Kirk and representatives from Lindum gathered on August 5th to officially re-open the area.

The Cornhill Phase Two works, which began in January 2021 and were funded through the government’s Towns Deal Fund, form part of the City Centre Vibrancy Programme and follow the completion of Phase One, which included the demolition of the former tourist information kiosk.

These works have significantly upgraded the existing paving, street furniture and associated drainage works, and this site now matches the quality of the area previously completed in the refurbished Cornhill Quarter. 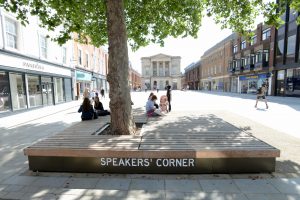 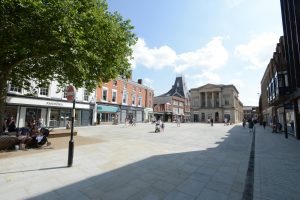 Maria Clayton, Capital Project Manager at City of Lincoln Council said: “We would like to take this opportunity to thank all the businesses for their patience and support during this period.”

These works have created a fully upgraded public realm area within the centre of the city, which improves access between the Transport Hub, Cornhill Quarter and the High Street, and also allows for a flexible space that can be used for a range of purposes, including events.

Mark Leason, Contracts Manager at Lindum added: “It’s great to see the work completed. It’s another piece in the jigsaw of improvements that Lindum has carried out around the Cornhill.

“It’s not been an easy job as the site is in the centre of the city. We’ve worked day shifts and night shifts to get it completed with the minimum amount of interruption. The shops nearby have been fantastic. They helped us come up with a phasing plan for the work and their staff have been really patient.

“Our subcontractor Lincolnshire Block Paving has done a great job too and Andy Sullivan, who carried out the work, was actually replacing old paving which was laid by his dad many years before.” 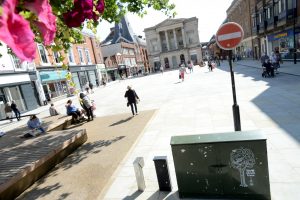 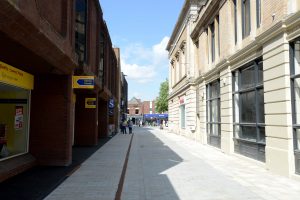 Cllr Neil Murray, Portfolio Holder for Economic Growth at City of Lincoln Council said: “I am very pleased to see the completion of improvement works at this important part of the city centre.

“The area is much improved and now compliments and connects better with the high quality standard of the Sincil Street/Cornhill quarter.”

This is the first project to be completed through the government’s Towns Deal Fund, in which £1 million in accelerated funding was awarded for the works.

The public has thrown its weight behind plans to build a new B&M store in Mablethorpe, on the Lincolnshire coast. One hundred percent of people who responded to a consultation on the proposal said they would support the scheme. Now, a formal planning application for a 14,000sqft shop on a 1.3 acre site to the […]

The newly renamed Hub in Sleaford is ready to open following a year-long £1.2 million transformation by Lindum Group. Previously known as the National Centre for Craft and Design, the Hub reopens to the public on Monday 17th of May. It now offers a new and more accessible ground floor gallery area, performing arts and […]

Work to build a new petrol filling station and convenience store will start in summer 2021 Lindum Group will bring forward the development at Killingwoldgraves roundabout near Bishop Burton. It comes after the Government’s Planning Inspectorate granted permission for the development to go ahead. Lindum development manager Matthew Carter said the scheme would serve an […]

Lindum will begin work to update paving and install new seating in Lincoln’s Cornhill Square next week. The work is part of the City Centre Vibrancy Programme and follows demolition of the old tourist information kiosk, which faced High Street. It comes after City of Lincoln Council was allocated £1 million of Town Deal Accelerated […]

Lindum will start work on new roadside services in south Lincolnshire next year after Government planning inspectors approved the plans. Twenty five jobs will be created by the development on land near the A15/A1175 roundabout at Market Deeping. South Kesteven District Council’s planning committee initially refused permission for the 24-hour petrol station and convenience store. […]

A major extension to Sleaford’s National Centre of Craft and Design will begin to take shape in the coming days as its new steel frame is installed. It is a major milestone for the £1.2 million project, which is due to finish in May next year, and comes just weeks after MRI Software revealed it […]

New drone images show how Lindum’s work to build new hotel in Newark is progressing. Due to open in February 2021, the 66-bedroom Travelodge is well into its second phase of construction. The development will generate up to 70 new jobs and further enhance Newark as a tourist destination, while creating new retail opportunities for […]

Partners involved in delivering a new cinema and leisure experience in Doncaster town centre enjoyed a preview ahead of its opening in the coming weeks. The £8.5million Savoy cinema complex will open its doors for residents and visitors in mid-September. The impressive six screen cinema and leisure complex has been developed and project managed by […]

Preparations are underway for a £1.2 million project to reconfigure, extend and enhance the National Centre for Craft and Design in Sleaford.

Lindum Group started on site on Monday, June 29. Fencing has been set up around the perimeter of the building and other preparations are being made ready for its transformation.

Store to open doors after major refurbishment by Lindum

Lindum has completed the extensive renovation of a Lincolnshire food store, including restoration of the shopfront to complement its historic surroundings. Lincolnshire Co-op appointed Lindum Construction to carry out work at Tattershall food store in the village’s Market Place. The £1.5m scheme saw part of the structure rebuilt to create a traditional-style wooden shopfront, reintroducing […]